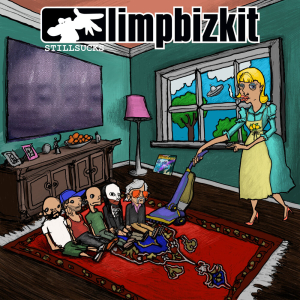 Still Sucks is the sixth studio album by American nu metal band Limp Bizkit, released on October 31, 2021, through Suretone Records. After the original lineup reunited in 2009, the bandâs fifth album Gold Cobra was released in 2011. They left Interscope and signed up with Cash Money Records in February 2012, with attempts to release a new album under the name Stampede of the Disco Elephants. The first intended single "Lightz (City of Angels)" was released on October 26, 2012. After many delays, the second single for the album, "Ready to Go", featuring labelmate Lil Wayne, was released on April 16, 2013. On November 1, 2013, the band released a new single "Thieves", a cover of the song by the industrial metal band Ministry. Another single, "Endless Slaughter" was released on August 1, 2014, through their website for free download. After numerous delays, the album was expected in early 2014. The band officially left Cash Money Records on October 26, 2014, stating that; "While we had a lot of fun making 'Ready to Go' with Lil Wayne, which turned out into a great song, we decided that they wanted to go a different route creatively, but we still have respect for everyone at Cash Money and look forward to the future and the release of Stampede of the Disco Elephants.â The album remained in development hell for years with no release date set. Guitarist Wes Borland had already completed writing and performing guitars for the record, but stated in late 2017 that frontman Fred Durst was still working on his parts. Borland again reiterated the band's progress in November 2018. In July 2017, Durst claimed on Instagram that the album had already been available online for a year and a half on Soulseek, but Borland refuted this saying he âdoesnât know what is talking about.â All four songs that had been published publicly between 2012 and 2014 were since removed from the alb