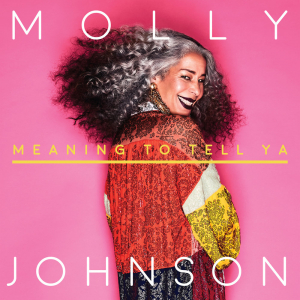 Meaning To Tell Ya

Molly Johnsonâs voice evokes the aura of dark, smoky night clubs of a bygone era. It speaks to an emotional depth that few vocalists in any genre ever reach. Like the woman behind it, it is a voice filled with humour, joy, surprise, sassiness and, of course, love. âMeaning To Tell Yaâ, Mollyâs highly anticipated new album was produced by multiple Grammy Award winning producer Larry Klein (Joni Mitchell, Tracy Chapman, Madeleine Peyroux, Melody Gardot, Holly Cole), and the album itself, is more than a jazz record, itâs funk, itâs soul, itâs groove, played by some of Canadaâs best musicians including Robi Botos (Piano), Mike Downes (Bass), Davide DiRenzo (Drums/Percussion), Justin Abedin (Guitar) and Pete Kuzma (Hammond B3). Says Molly: âThis is a record I have been wanting to make for years, I canât wait to share it with everyone!â Says Larry: âMolly has a voice that is who she is as a person. Mollyâs voice has the kind of character that when you hear it, you hear who she is and you hear her story, you hear what sheâs done and where she has been and that is what Iâm drawn to in a voiceâ¦â âMeaning To Tell Yaâ features 10 songs that include Mollyâs interpretations of such classics including âInner City Bluesâ (Marvin Gaye), âBoogie Streetâ (Leonard Cohen) and âLady Day and John Coltraneâ (Gil Scot Heron) alongside 7 originals including âBetter Than Thisâ and âMeaning To Tell Yaâ co-written with long time song-writing partner âSteve MacKinnon, âGoneâ , âProtest Songâ and âL.O.V.E.â with Davide DiRenzo, âStopâco-written with producer Larry Klein and David Baerwald and âTogetherâ with bassist Mike Downes. A highly respected philanthropist, multiple Juno Award winner and Officer Of The Order Of Canada, Molly has raised millions of dollars for people living with HIV/AIDS with her own Kumbaya Foundation, hosted a radio show on CBC Radio 2, and in 2016, launched the Kensington Market Jazz Festival, a yearly event held in September that includes over 400 Canadian musicians, performing 150+ shows over one weekend. Upon release Molly will be touring throughout Canada & Europe to support the album including an album release show in Toronto and heading shows at the Montreal and Halifax Jazz Festivals. Tracklist: 1. Inner City Blues 2. Better Than This 3. Lady Day And John Coltrane 4. Boogie Street 5. Gone 6. Stop 7. Protest Song 8. Iâve Been Meaning To Tell You 9. L.O.V.E. 10. Togeth