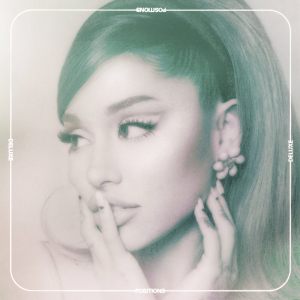 Positions is the sixth studio album by American singer Ariana Grande, released on October 30, 2020, by Republic Records. The singer worked with a variety of producers on the album, including Tommy Brown, Anthony M. Jones, London on da Track, Murda Beatz, the Rascals, Scott Storch, Shea Taylor and Charles Anderson. Grande discusses themes of sex and romance on the album, which continues the R&B and trap-pop sound of its predecessors, Sweetener (2018) and Thank U, Next (2019). Positions also incorporates elements of hip hop, neo soul and funk, alongside guest appearances from Doja Cat, the Weeknd and Ty Dolla Sign. Upon release, the album was met with generally favorable reviews from music critics, most of whom complimented Grande's vocals but criticized the production and lyrics. Positions appeared in many year-end best music lists from publications. The title track was released as the lead single a week before the album's launch. The song debuted atop the Billboard Hot 100 and earned Grande her fifth number-one single in the United States. It marked her third Hot 100 chart-topper in 2020, and made her the only act with five number-one debuts on the chart. Following the album's release, all 14 of its tracks charted simultaneously on the Hot 100, with the second single, "34+35", arriving at number eight. Positions debuted at number one on US Billboard 200 chart with 174,000 album-equivalent units, which includes 42,000 sales, marking Grande's fifth number-one album in the US. Elsewhere, it reached the top spot in Argentina, Canada, Ireland, Lithuania, New Zealand, Norway, and the United Kingd