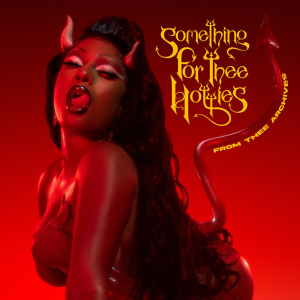 Something For Thee Hotties

Something for Thee Hotties is the fourth mixtape by Megan Thee Stallion, released on October 29, 2021, especially for her fans. On October 21, Megan announced the project's title, stating it would be released eight days later. She explained that the tracklist is comprised of some unreleased songs, as well as some freestyles that were discoverable online but had never before been officially available on streaming platforms. The droplet single "Thot Shit" was soon after revealed to be the tape's closer. Meg counted down the days until release on social media â interacting with fans and gradually posting new images of herself cosplaying as the devil in a Halloween-themed photoshoot as the week progressed. With under an hour left to go before the project was due to drop, Meg shared an updated version of the tracklist, declaring a selection of last-minute tracks had been added and the release would be slightly delayed as a resu