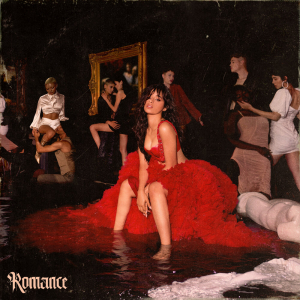 Romance (stylized ð½ðððððð) is the sophomore studio album by Cuban-American singer Camila Cabello. It was released December 6th, 2019, through Epic Records, Syco and Sony Music. Romance features two collaborations with Canadian singer-songwriter, Shawn Mendes and American Rapper, DaBaby. The project was first teased through a video titled "What Do I Know About Love?" The first two singles, 'Liar' and 'Shameless' were released 5 days later on September 5th, 2019, as well as the album name Romance. Additional singles, 'Cry For Me' and 'Easy,' were released on October 4th, 2019 and October 11th, 2019, respectively. The album cover was teased on her instagram by posting photos slowly November 12th and on November 13th, 2019, she posted the full cover with the release date December 6th, 2019. The pre-order for Romance was put up on November 15th, 2019 and was released with 'Living Proof.' It was also revealed Cabello's and Mendes' worldwide hit, 'SeÃ±orita,' would feature on the alb